What is Vector Edging?

Vector edging is a technique of using vector cuts to create sharply defined edges between areas of raster engravings. This is done by creating a vector file to overlay the raster images. The vector file is run as a cut, but not given enough power to go all the way through the material. The end result is a much sharper edge than you would get with just a raster engraving. 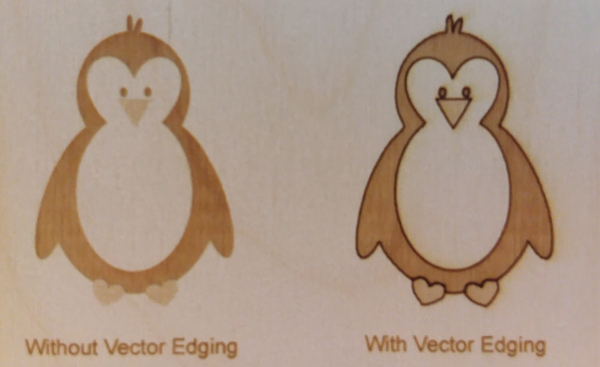 When to Use Vector Edging

Vector edging works well for most raster designs since it helps create distinct areas. Additionally, it works very well for outlines, texts, clipart, and other areas were you do not want the interior of a shape filled in by rastering. This technique can also help smooth out engravings that are noticeably pixilated.

While vector edging is possible with almost any image, it is not compatible with all types of materials. Materials that cannot be cut (such as glass) can not be edged. With other materials, such as fabrics and paper, it is not possible to find a setting low enough to only go partially through the material.

As with all projects, it is recommended to try it on scrap material whenever possible.

Setting Up a Vector Edge

Before you begin, you will need to have both the raster image to engrave and the vector lines for the edge work. Often times, creating the vector pattern can be done very easily in a free program such as GIMP or Inkscape. Please see the Vectorizing Images page of this guide for more information on the process.

The raster settings will be exactly the same as they would be for a non-edged project, however the vector settings will have to be significantly altered. The power should be less than half of what it would be to fully cut through the image, and the speed should be at least 20% higher. The cut does not have to go very far into the material to get the desired effect, so start with low power and raise it if necessary.