Glass engraves very well, and is easy to work with. However, it cannot be cut. Engraving glass creates a white (or near-white) frosted effect with sharp detail.

Both flat and rounded objects can be used with the engraver.

In addition to the Makerspace-wide policies, there are additional safety considerations when working with glass:

If at all possible, cover the part of the glass that will be engraved with a thin layer of soap. Direct or instant foaming dish soap works best as it is easiest to remove. Once properly soaped, place the object in the cutter and set up the images in the software as normal, using the glass settings.

After running the engraving job, remove the object, being careful not to touch the part that was engraved. Rinse the soap off, which should remove any glass debris. You should still be careful and wash the object as soon as possible - preferably in a dishwasher.

Glass can be scratched on the metal tables in the laser cutter. If possible, put something underneath the glass, such as paper towels or cloth. As long as the laser is firing directly over the glass, it will not damage anything else on the table, including objects directly under the glass. Additionally, using the solid table instead of the cutting grid will help prevent scratching.

Place objects directly onto the table - do not slide them around.

If the glass is clear and flat (such as a plate or casserole dish), you can engrave the mirrored image into the back of the glass. This will put the engraving on the far side, where it will not be touched by food or other possible contaminates, while still being perfectly visible.

To engrave the underside of an object, place the object in the laser cutter upside down - all other steps remain the same in terms of where you place it and using Center Engraving (if needed). In the layout software, import your images, and then horizontally flip the image. Then simply position the image, load the settings, and send the job as you normally would.

Click on the object to select it. On the top menu, choose "Object" and then "Flip Horizontal."

Click on the image(s) to flip and then in the Object menu, select "Transform" and then "Reflect". In the new window that pops up, select Vertical Axis and click "Ok". 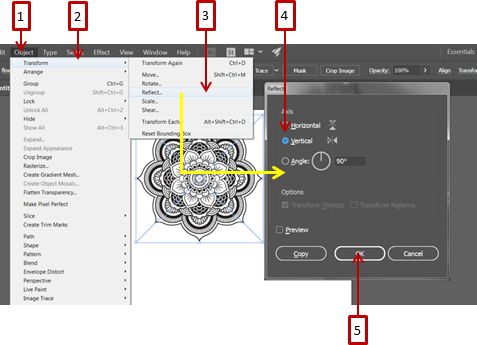 There is a rotary attachment at Library 21c and Sand Creek that can engrave rounded objects, such as wine glasses and bottles. Please see the Rotary Attachment page for instructions and more information on what types of objects will work.