What is Center Engraving?

When to Use Center Engraving

While center engraving is unnecessary for most projects, there are several situations where measuring from the upper left corner is not ideal.

Center engraving will work on any project, however in most cases it will be faster and easier to align the material and images to the upper left corner.

Under Options (lower left section of the General tab), check "Center-Engraving." This will set the machine to use a different point as the origin. In the drop-down menu below, you have four options for a new origin point. 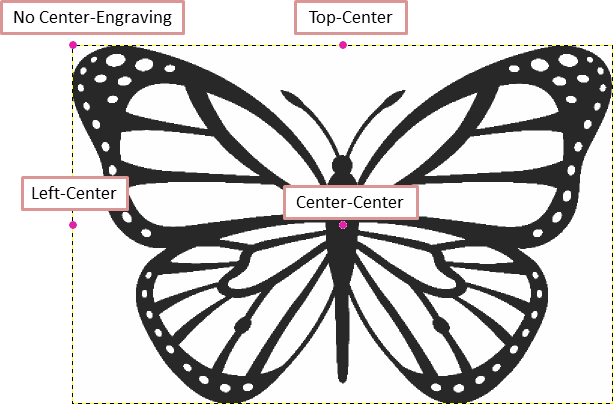 Note that all of the options will give you the same results, the only difference is what point is used to mark the location of the image. Which one works best is a matter of personal preference, the particular image, and the material being used. Send the job as you normally would.

Make sure the job name on the machine's display has an asterisk (*) at the end. If it doesn't, it was not set up for center-engraving.

Place the material in the laser cutter - it does not matter where on the bed, however if there is a distinct top or side to the material, it is usually important that it is parallel to the top/side of the laser cutter bed. Now it is time to move the lens into position.

For the Helix (Library 21c)

For the Zing (East and Sand Creek)

Once the job is complete, the lens will return to the position  it was moved to, so if you have more projects that will use that position as the origin, you can send them and continue as normal. If you need to move the lens to a new position, simply unlock it and move it as you did before. Note that it is faster and generally easier to move the material than it is to move the lens, so if possible simply slide the material around until it is lined up for the next project.

If you are done with center engraving and need the lens back in the upper left corner, rather than move it manually, you can have the machine re-align itself:

For the Helix (Library 21c)

For the Zing (East and Sand Creek)